I was 10 when my mother drove us across Country from Michigan to California to visit him and meet him for the first time.

As a young girl who always wondered about her father, I was thrilled.  The next time I saw him I was 16, it was his parents’ 50th Wedding Anniversary.

He invited me out to California to visit him anytime.  I thought he was so cool.

In all my years growing up though, he never wrote me, sent cards, answered the  letters I wrote to him.  The older I got, the more I made that mean something about him and something about me.

I began to form all kinds of negative feelings toward him.

The third time I saw him was a few years ago.  I attended an intensive weekend–a world renowned event called the Landmark Forum.

The Landmark Forum helped me see that things happen to us and we have our own interpretation about what happened.  Those interpretations aren’t necessarily what really happened! 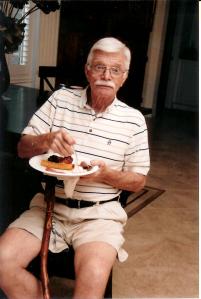 After years of no communication, I simply thought he didn’t care about any of his children.

However, after finishing The Landmark Forum, I contacted my father and we created a new relationship.  We let go of the constraints of the past and started from nothing–it was so freeing.

I realized, with his help, that there are two sides to every story and the truth usually lies somewhere in between.  I learned a lot about my father in those few years.  I found lots of compassion for him.

Growing up he had gone to a total of 26 elementary schools.  TWENTY SIX!

His father had a job that kept relocating them.  Imagine how hard it would be to create lasting bonds with people.

He was young when he and my mother were together, he was still learning life and she and we were part of his learning.

He went on to have 3 more wives, and 2 more children in addition to the 5 he had with my mother.

In his last 22 years, he was married to Vicki.  She is an amazing woman and he raised her two kids from a very young age.  He confided in her everything about his life and she loved him deeply.  He was a great father for Linda and Michael and they loved and respected him all their lives.

Even so, he had so much regret and remorse over his past and he always shared with Vicki, the pain he carried with him.

Vicki understood him completely.  Just before he died, he was in a lot of pain the night before and kept waking Vicki and Linda.

They couldn’t figure out what he meant???

After my father died in Vicki’s arms, she realized what he had been referring to.

His very first child with my mom was Jay Ann.  She died of Leukemia at the age of 3.

When he and my mom would bring her home from the hospital after getting a treatment, she would have extra energy and be full of fun and laughter.  She would go and slip her little feet into his big boots and run around.

He chased her and would say, “take my boots off”.  It was a joyful time for him…just to see her happy and full of life and energy.

My father was getting closer to that state of Pure, Positive, Energy that comes with passing.  He was happy and thrilled that he would be in that place with his first child Jay Ann.  The place is what we can all find glimpses of here, in this realm,  if we just try.

I feel so fortunate to be able to say that I am at Peace with his passing.  I cleared my body of all the negativity that comes along with not being able to forgive.

Most importantly, I asked him to forgive me for all the judgments I made about him.

I came to know what compassion really is–the ability to see someone the way their Source sees them. Source=God=Infinite Intelligence.

My father was a good man.  He had so much going for him and I was able to see through all the veils I had in front of me regarding him and who he was.  We are all here doing the best we can and I feel fortunate to have been able to call him “Dad” later in life.

I AM AT PEACE!

0 thoughts on “Please Forgive Me”