This month marks my 20th year of mountain biking!  I’ll never forget the first time I rode up Palisades Drive on my mountain bike–my former husband was way ahead of me and all I could do in my mind was beat myself up!

“Sure, he’s way ahead of me, his father was a 9 Letterman in high school so he’s got the genes.  My father was a bowler!”  Not that there’s anything wrong with bowlers, it’s just that the sport doesn’t lend itself to huffing and puffing up a hill.

My lungs and my legs were burning–I was sweating profusely and my head felt like it was about to explode!

I did find out that Sean’s legs and lungs were burning too.   He felt pain and humiliation similar to me–his body was not functioning with ease.  It was hard! 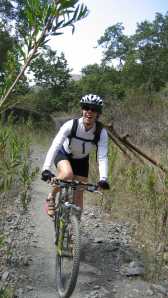 The good news is that today I rode up the same hill, instead of beating myself up, I was actually enjoying the ride.  My legs and lungs weren’t burning–it wasn’t easy but it was more of a pleasant ride up the hill, certainly not as bad as that first day 20 years ago!

Everything is a process.  I’ve learned how to just go with the flow and be in the middle of whatever fire may be burning.  I’ve ridden up that hill hundreds of times now and that alone takes the anxiety away.  Anything you do as a beginner, for the first time, can produce anxiety and just feel hugely hard to endure.

I caught the attention of another biker when I rode around the pole that separates  the dirt trail from the road,  “Wow, I saw you maneuver around that pole and I was very impressed,”  he said.  “I’ve been riding for a year now and I’m afraid my pedals will get all caught up and I’ll fall.”

“Ah yes, that pole,” I assured him,   “I was afraid of that pole for a very long time before I actually attempted to make my way around it.  I would get off my bike and walk the bike through and just notice how much room there was as I walked through.  Then, one day I had the guts to give it a try!”

I then shared that this month marks my 20th year riding.  “Wow, 20 years, can you give me any tips?”

I wanted to share more than a couple of tips but I also wanted to get on with my ride–two pieces of advice that worked for me–“keep your eyes on where you are wanting to go, not on the ruts because your bike will tend to follow your eyes.”  That tip works for life too!

The other tip is what one of my fellow racers told me after a race when I asked,  “how do you stay on the bike, I keep crashing?”  She said, “It’s just Time In The Saddle–you just gotta go through it, to get to it.”

I remember, at the time, I didn’t like hearing it.  I wanted to just be great NOW, be proficient NOW,  and not have to deal with the growing pains.  Now, 20 years later, I get it.  TIME IN THE SADDLE!

I continued on with my epic ride–after not being on the bike for about a month– I went a bit slower than I would normally pedal up the hills, but I was out there in the middle of all the wonder and the glory! 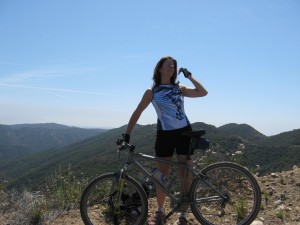 I chose a loop that isn’t just up to the top then down, it was up then down and up and down and up some more.  Then the final descent was fast and technical and since it was a Saturday, there were lots of hikers out there, it took even more skill in handling the bike down those hills since my path was narrowed even more by the hikers!

People have always been supportive as I ride by them UP a hill–they say things like, “wow, you’re strong,”  and their mouths drop open in awe as I fly by them DOWN the hill and there is no time to speak.

Talk about EMPOWERING!  No, I don’t ride to get their approval or their admiration, but it is kind of nice to receive.

Yes, mountain biking is one of the hardest activities I’ve ever tackled.  I remember the first time we saw someone riding up a fire road on a mountain bike, we thought, “this guy is crazy.”  Not long after that, we became crazy!

It is fun reflecting, it is fun feeling a difference from the very first time up that hill.  It is so empowering being out in the day, flying through the air with a skill that took time to develop.

If there’s something you want to take on, go for it.  You’ll be able to look back one day and remember what it took to get to where you are and you’ll feel pride, you’ll feel freedom.  We are a force of energy, we might as well use it to bring us thrill, pleasure, and joy.  Namaste’ 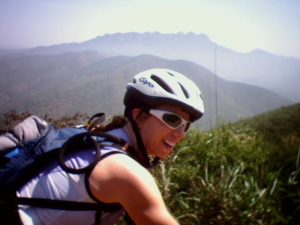